Almond Flour: What You Need to Know About This Grain-Free Substitute

Rate this post
When it comes to Paleo, “flour” is a taboo word — conjuring up images of sugar-laden cupcakes and donuts. Good news: there are healthier, Paleo-friendly flours which can be used to create delicious baked goods and other treats! Today, we’ll introduce you to Almond Flour — the pros, the cons and how to use it.


Since “flour” is technically any powder made from grinding a food, there are many different Paleo flours one can utilize. Some of the most common Paleo favorite flours include coconut flour, arrowroot, and almond flour.

When it comes to almond flour, there are many benefits and uses for this unique ingredient. Let’s discover them…

What is Almond Flour? 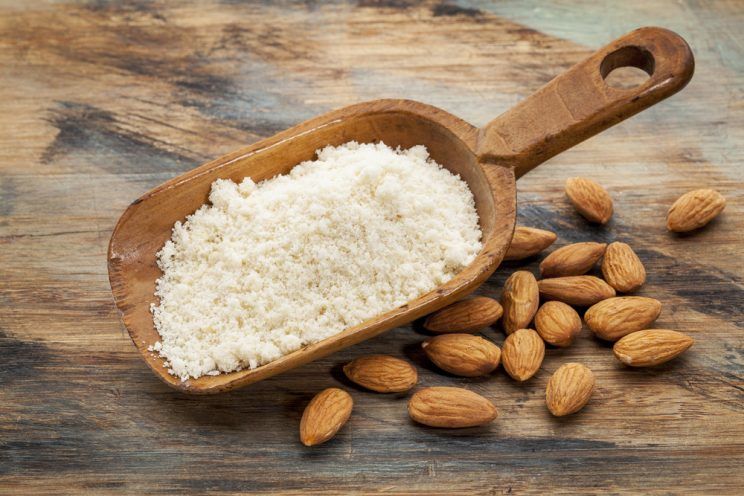 Almond flour is made from ground-up almonds, and can be bought in retail stores or online. If you must choose, online is the much cheaper option, so I would opt for that avenue whenever possible.

Interestingly, 80 percent of the world’s almonds come from California, due to the ideal growing climate found there. For a little more background, it’s important to understand that technically the almond is not actually a nut, but instead a drupe. Drupes are commonly defined as fruits which usually have an outer skin, a pulpy middle, and a hard shell.

The almond is not actually a nut, but a drupe — a fruit with an outer fleshy part surrounding a shell with a seed inside

The almonds most commonly used to make almond flour are the seeds of the fruit, which grow on almond trees. Typically, the flour is made by blanching (removing the skins), and the resulting almonds are then ground to a fine texture.

As with all your food choices, it is best to always choose the highest quality products, with a transparent production process, whenever possible. Almond flour can be found for as a little as $8/pound, online.

The Benefits of Almond Flour 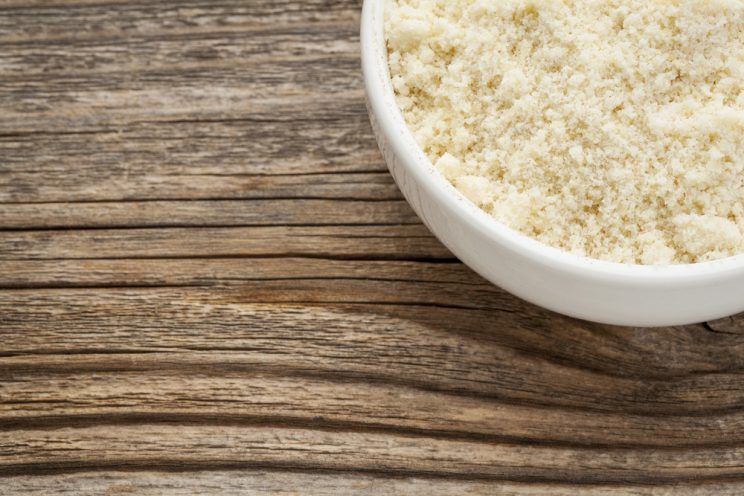 Almond flour is a great alternative for those who have a gluten allergy, as it is gluten-free. It also is low-carb, and free of the many downsides typical of more conventional flours.

Almond flour is also high in nutrients and very easy to use. Perhaps the best benefit of is that it contains a near-identical nutrient profile as whole almonds. [1] This is noteworthy, because almonds have more nutrients per serving than any other nut. [2]

To start with, almond flour has polyunsaturated fats, which provide essential omega-3 fatty acids. [3] Omega-3s are needed for clotting blood, brain cell growth, protecting your heart, and lowering the risk of stroke. [4]

In a typical serving, almond flour contains 11 grams of fat, with 7 grams being heart-healthy monounsaturated fats, and less than 1 gram of saturated fat. [5] This flour also has a nice dose of vitamin E, which is a great antioxidant. [6]

If you are worried about your blood sugar, you will be happy to know that almond flour is low in sugar and high in protein. All of these points make it a much better alternative than conventional flours. If you have the choice, always opt for blanched flour instead of unblanched. Many users have reported problems or issues with the unblanched varieties. 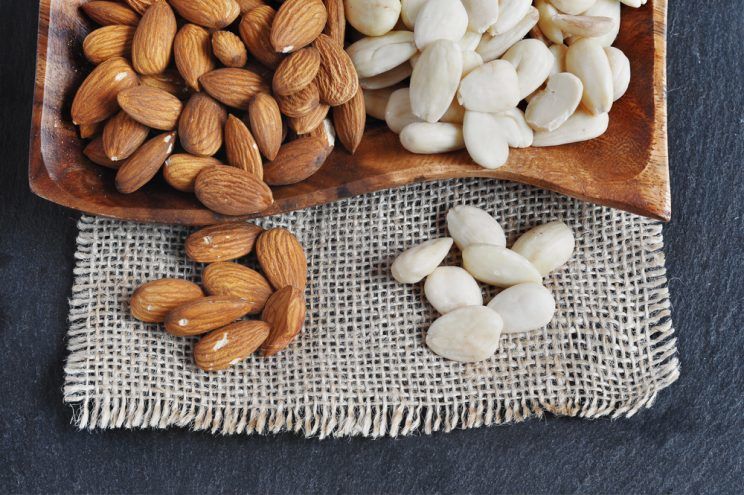 Though both products are on the market, and sometimes sold separately, there are slight differences between almond meal and almond flour. For starters, almond meal is a little coarser, while the flour is finely ground. One turn-off that is fairly common is the visible leftover skin, which can be found in the almond meal.

The almond flour will not have the skin, as it is usually blanched. This is important to note for health reasons, as the protective chemicals are found in the almond’s skin. [7] In general, almond flour is best for lighter-texture items (like a Paleo cake) while other recipes can use either flour or meal (think breads, pancakes, Paleo cookies, etc.) 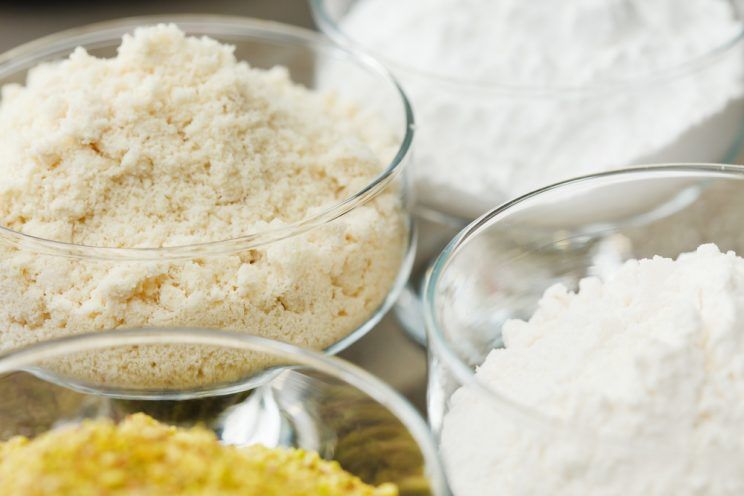 Coconut flour is another popular Paleo flour, and the differences are small, but important. For starters, the almond variety will definitely impart a slightly “nuttier” taste to your foods. By contrast, coconut flour will lend your creations more of a sweet, coconut flavor. Makes sense, right?

Nutritionally, these flours are both on the same level, though they have different strengths and weaknesses. If you’re looking for the lower-carb choice, almond flour is the winner, with only 6 grams per ¼ cup. [8] Coconut flour, by comparison, has 16 grams in the same serving size. [9] Almond flour has advantages in protein and fat, but lacks the fiber punch of coconut flour. [10] [11]

Coconut flour has less fat, but the fat is not the inflammatory omega-6 found in abundance in almond flour

However, one element that most will care about is the type of fat found in both kinds of flour. Coconut flour has less fat, but the fat is not the inflammatory omega-6, which is found in abundance in almond flour. [12]

This is not a huge issue if you are using these flours sparingly (as recommended), but may be something to think about if you plan on using one flour over the other on a semi-regular basis.

Recipes will usually require a little less coconut flour, and a little more almond flour, due to their differing abilities to absorb wet ingredients. Experiment with both, until you find your own personal preference!

Making Your Own Almond Flour 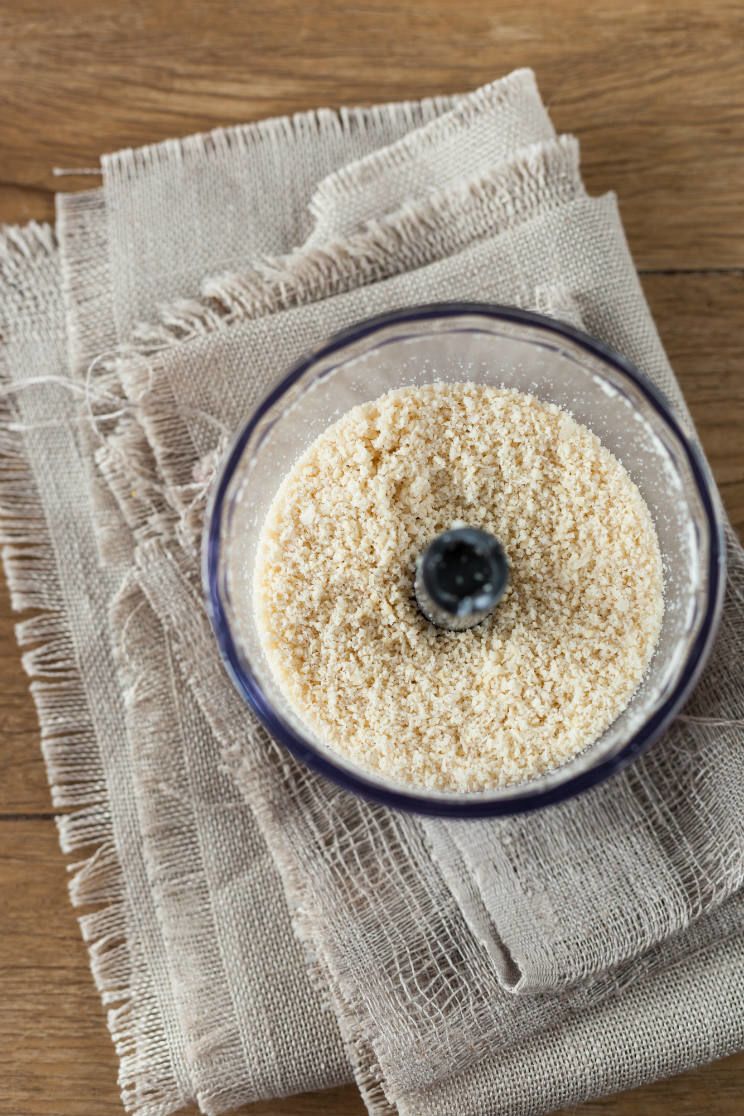 Luckily, making your own almond flour is pretty easy. Starting with almonds that are already sliced can make this process a little easier, but basically, you want to put the almonds in a food processor (or blender) and grind them until the flour is to your liking.

Be careful to not let the nuts get oily (at that point, you might want to make almond butter). This can be avoided by doing a stop-start motion with the on and off switch. The continuous heat (if you leave the processor on) will start to make the nuts oily, which will not be ideal when making flour.

How to Use Almond Flour 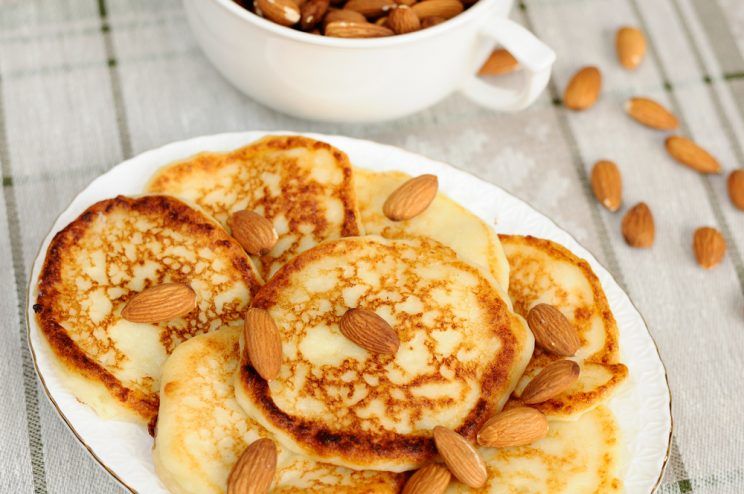 Almond flour is extremely versatile. One of my favorite uses is for making Paleo-friendly pancakes. You can also use it to make waffles, cakes, Paleo banana bread, Paleo muffins, crusts — the possibilities are endless! If you are having trouble getting started, we have an epic list of 41 almond flour recipes to get you started.

Baking and Cooking with Almond Flour 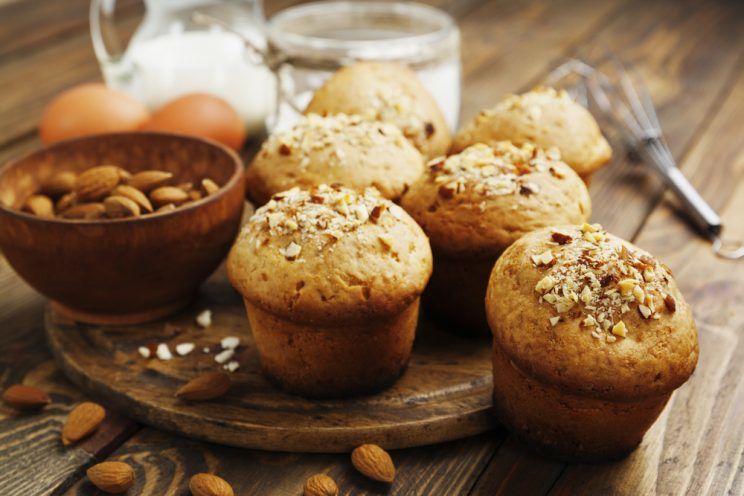 If you’re familiar with baking or cooking with regular flour, you should have no problem learning how to substitute or use almond flour! There may be some subtle changes if you’re switching from all-purpose flour, like using an extra half of an egg.

In addition, some recipes may work better with 1 extra egg, and most will give you better results if you use a temperature that’s 25°F lower than normal. If you choose to go this route, make sure you add a little bit of cook/bake time, as well.

How to Store Almond Flour 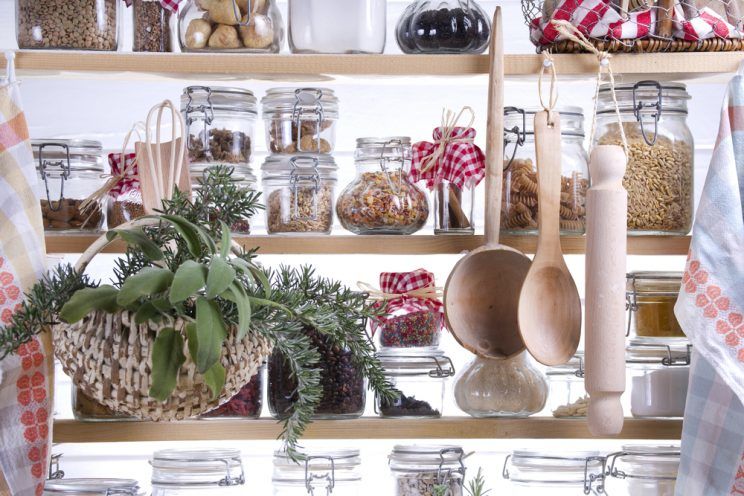 The next question is: how do you store it? Make sure it is placed in a cool, dark place, inside of a well-sealed container. You can also freeze it. Either way, it should keep for up to a year, as long as it’s kept away from heat and light.

Almond flour has a ton of advantages over traditional flours, and can be used in a wide variety of applications. However, it is important to note that while most people can enjoy this flour alternative, it is not for everyone. Just like those sensitive to gluten, those allergic (or sensitive to) almonds will want to skip cooking or baking with almond flour.

Some people that are even sensitive to nuts in general likely will not be able to tolerate almond flour. Another group of people who may have issues with it is those with oxalate issues, since the flour is high in oxalates. [13] In these cases, you will likely want to try coconut flour, instead.

Almond flour is a great alternative to slowly move away from the traditional Western diet. You can still recreate some of your old favorites, while still avoiding gluten and grains.

Remember, though — it should not be a staple of your diet. Most healthy Paleo meals will still focus on high quality meat, vegetables, healthy fats, and starchy tubers. While it can be fun to make some treats and give your life a little variety, do not fall into the trap of eating “Paleo” pizza five nights a week. That being said, get a little creative, have fun, and enjoy the new world of almond flour-based treats!