What Are The Four Main Types of Bone Cancer? Part 1: Osteosarcoma

There are four main kinds of bone tumors, called osteosarcoma, fibrosarcoma, chondrosarcoma, and hemangiosarcoma. Osteosarcoma remains the most common type of main bone tumors. Other types of cancer such as rhabdomyosarcoma, liposarcoma, plasma cell tumors and lymphoma could also involve the bone, usually as a part of a generalized cancer process. We will discuss the first type in this article. 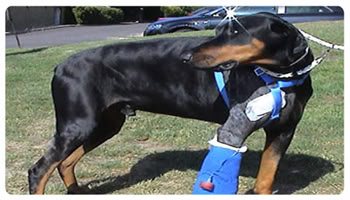 OSA, as osteosarcoma is abbreviated, is the most common primary tumor type in bone. Statistics show that over 8,000 canines are affected by osteosarcoma in the United States alone. It occurs in the limbs, but it is known to occur in the skull, ribs, jaw or spine. The cause of osteosarcoma is not known. Theories about the development of osteosarcoma include frequent and repetitive injury to the bone, an underlying disease involving the bone, infections (viral), a genetic history of bone cancer, previous breaks and fractures, and previous exposure to radiation. They remain theories, however, as they have yet to be proven.

Osteosarcoma happens in large or giant dog breeds more than in smaller breeds. They are 20 times less likely to have OSA occur in them, but it is not unheard of. Size and height, obviously directly related to bone, are more significant risk factors than the breed of the dog, and it has been found in studies that the dogs affected by this disease are young. They are included in the ages 1 and 2 years, or in the range of 7-9 years of age.

This bone disease is very painful as the bone degrades from the inside out. It develops first deep inside the bone and grows outward.

Keep reading to see the next main type of Dog Bone Cancer: Chondrosarcoma.